I have had this recipe since November 2008 and never had a chance to make it.  It is from the first issue of the Food Network Magazine and is their attempt to copy the Cheesecake Factory's pumpkin cheesecake.  I was very excited to make this for my family's Thanksgiving, but June Bug had other plans.  I was so sick for 48 hours straight, there was no way I could have made this!  So I decided to make it for my family's Christmas Eve celebration.

Everyone loved it and it was relatively easy, but time consuming, to make.  I have made a cheesecake before, but this one required the pan of water to bake it in, which the one I made previously did not.  That was my only complaint with this recipe.  That part was kind of a pain.  Another side note, I am sure sure if I didn't press the crust enough or if my springform pan was 9" rather than the 10" they recommend, but I had some extra batter.  I apologize for the low quality picture...It was one I took with my phone and I never went back to take one with my real camera later! 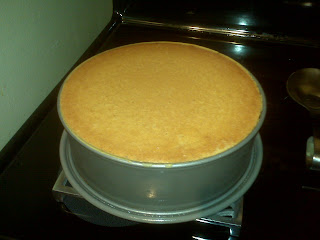 1. Position a rack in the center of the oven and preheat to 325.
2. Brush a 10" springform pan with some of the butter.  Stir the remaining butter in with the graham cracker crumbs, 1/4 cup of the sugar and a pinch of salt in a bowl.  Press the crumb mixture into the bottom and up the sides of the pan packing it tightly and evenly.  Bake until golden brown, 15-20 minutes.  Cool on a rack, then wrap the outside of the pan in foil and place inside roasting pan.
3. Bring a medium pot of water to a boil.  Meanwhile, beat the cream cheese with a mixer until smooth.  Add the remaining 2 1/2 cups of sugar and beat until just light, scraping down the sides of the bowl and beaters as needed.  Beat in the sour cream, then add the pumpkin, eggs and vanilla, 1 teaspoon of salt and spices and beat until just combined.  Pour into the cooled crust.
4. Gently place the roasting pan in the oven (don't pull the rack out...this is what they say, I had to.  I was pouring water all over the inside of my stove) and pour the boiling water into the roasting pan until it comes about halfway up the side of the springform pan.  Bake until the outside of the cheesecake sets but the center is loose, about an hour and 45 minutes.
5. Turn the oven off after the hour and 45 minutes, and open the door briefly to let some of the heat out.  Leave the cheesecake in the oven for another hour then carefully remove from the roasting pan and cool on a rack.
7. Run a knife around the edges, cover and refrigerate for at least 8 hours or overnight.
8. Bring the cheesecake to room temperature for 30 minutes before serving.  Unlock and remove from the springform pan to serve.
9.  Add whipped cream and toasted pecans if desired.
Posted by AmyVan317 at 6:30 PM