The best way to spread Christmas cheer is singing loud for all to hear.

I don't sing, (outside the privacy of my own car or a kareoke bar in Asia after a few Tiger beers or sake bombs) but I do like to spread cheer putting up Christmas lights outside!  I was able to get them up on a warm-ish November day and I am glad I did before the super cold arrived!

A new house, a new challenge with lights.  There is no outside plug, so I had to run a long extension cord from the side of the house to the front.  It is bright orange for now (since that is what we had), but I would like to look for a green one if I can snag it post-holiday for 50% off.

The set of two pre-lit trees I got at Target around mid November.  I saw in the weekly ad that they were on sale for $30 for the set and Steve had gotten a $5 gift card for buying body wash or something, so I got my two cute little trees for $25!  We placed them in my planter pots with dirt because I learned early on, they blow over really easily with the wind.  I had purchased some "old fashioned" bulb lights last year (you know, the orange, white, red, blue, green big glass bulb ones?  I love them because they take me back to our Christmas lights as a kid) and put those on our little holly bushes.

Looks pretty cute if I do say so!  In fact, our neighbors directly across the street must have thought so too because they bought the same pre-lit trees and put them on either side of their door last week! 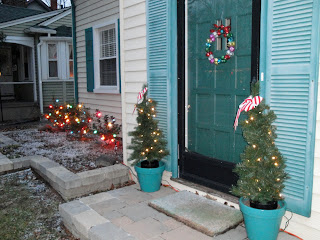 Because I had the extra strands of lights and I thought it would be fun, I decorated two of our larger bushes in our backyard.  It is nice to look out and see some Christmas cheer as we sit in the family room every night. 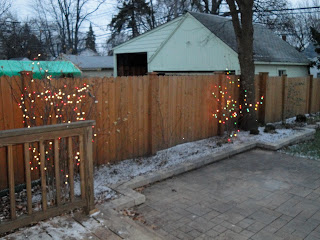 Labels: Around the House, christmas