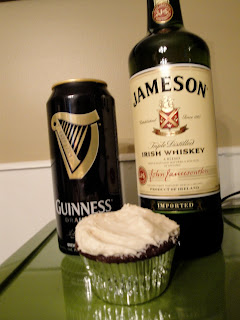 In honor of one of the greatest days of the year, St. Patrick's Day, I decided to attempt a recipe that a former Knottie friend of mine gave me.  I have also seen it pop up on a few other food blogs lately, so they must be popular this time of year!

I was also excited to use my new camera as an early birthday gift from Steve to take these pictures!  I was really excited to see it had a "gourmet food" setting. :)

These were fairly time consuming, but not overly complicated.  I made 19 cupcakes out of this recipe.

Baileys Frosting
3 to 4 cups confectioners sugar (I used about 3 1/2)
1/2 cup unsalted butter, room temperature
3 - 4 Tbsp Baileys (or milk, or heavy cream or a combination thereof...I used a small airplane bottle size of Baileys~apx. 4 tsp. and a splash of heavy cream)

Make the filling
Fill the cupcakes 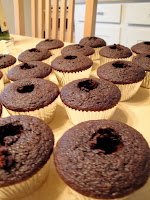 Using a 1" cookie cutter or a corer (I used a corer, it worked like a charm), cut the centers out of the cooled cupcakes.  You want to go most of the way down, but not all the way.  Aim for around 2/3. 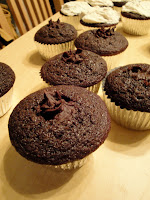 Put the cooled ganache into a piping bag and fill the holes on each cupcake to the top.
Make the frosting
Decorate and enjoy!
Posted by AmyVan317 at 7:05 PM