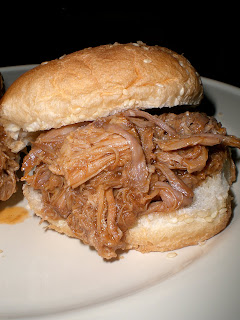 Pork -2, Amy - 1.  I had written off cooking pork.   I tried 2 different recipes for a pork tenderloin and both were disappointments.  When I suggested to Steve that I make a pulled pork sandwich for Super Bowl Sunday dinner, he said sure, and I didn't even realize I volunteered to cook pork...the meat that had haunted me!  This was a great, simple recipe that was delicious!

I found this recipe on All Recipes.com and since it was a Crock Pot recipe, I thought it would be perfect.  It was very easy and didn't require any out of the ordinary ingredients, which I always like!  I did add some BBQ sauce and liquid smoke at the end per the recommendations of others on the site and it was great!

I wish I would have remembered to buy some nice kaiser rolls to have with these, but I forgot to grab them at the store.  Luckily, I had some regular old boring sesame hamburger buns in the freezer.

I did cut the recipe below in half.  The original serves 12.  We had enough for 4 sandwiches and probably at least 4 more, which will be great for dinner this week.  Here is the original.

I did try to remove a majority of the liquid the meat cooked in to cut down on the juicy/messiness.  That is when I added about 3/4 cup of BBQ sauce and around 1 Tablespoon of liquid smoke.  I let that heat up for another 15 minutes or so and then served.
Posted by AmyVan317 at 7:54 PM

I love my slow cooker! I have a bunch of healthy slow cooker recipes that I post on my blog if you're interested. (http://healthyslowcooking.wordpress.com)